skip to main | skip to sidebar

Tried inking with one of those brush pen things. 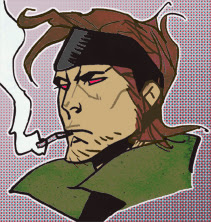 It's supposed to be Gambit.
I just drew him as I remembered him to be, which
is solely based on my rather distant memory of playing Marvel vs Capcom. I think.
I googled him after I saved the thing, and he actually has a head gear thingy, not a head band.
Plus his hair is a bit rougher. And I forgot to color the cigarette. Arghhhhh fail XP 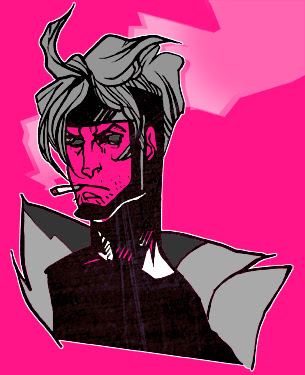 Edit: Ok, I just redrew him.
I think this is a slightly more accurate rendition of Gambit.
Nice hot pink flash. His chest guard thing is pink, so I guess it's ok.
Posted by Hitomi Mori at 1:29 PM

ahaha, there's something really enjoyable about how you draw his cig and his facial hair. Really capture his cool-but-dorky character. Hot pink totally suits him. ::thumbs up::

Hitomi Mori
Senior illustration major @ MICA. I bring diversity to the class by being Japanese.